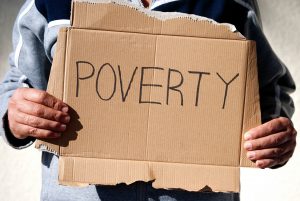 The United Nations (UN) completed a study of poverty in the United States in December 2017. This UN report included data from visits to Alabama, California, Georgia, West Virginia, Washington, D.C., and Puerto Rico.

More than 5 million Americans live in “absolute poverty,” a term which refers to Americans living in third world conditions. According to the U.S. census, more than 40 million Americans live in poverty. Safehouse Outreach, an organization that assists people facing homelessness, reports an increase in the number of people underemployed over the last few years despite decreasing unemployment rates.  At least 40% of Safehouse Outreach’s clients are holding 2-3 jobs and still struggle to pay their rent. The UN report also showed that America has the highest child mortality and child poverty rate in the developed world.  Forty-six million Americans depend on food banks, which is 30% above the levels in 2007, according to Feeding America.  Many of the people living in poverty were either born into poverty or had become disadvantaged due to circumstances beyond their control — such as disability, divorce, illness, or old age.

In Georgia, over 1.6 million individuals are living in poverty.  The Center for American Progress, defines poverty as a family of four who earn less than $24,340 annually. Overall, this means that 16% of Georgians in 2016 were living in poverty.  However, 22.6% of Georgia’s children live in poverty, making Georgia rank 41st in America for poverty. Income inequality is also very high.  Income inequality is measured by the ratio of income going to the top 20% of households against the bottom 20% of households.  Georgia ranks 39th of all states in higher percentages of  income inequality.   In addition to poverty, Georgians are the most uninsured residents of any state, other than Texas.  The most recent healthcare data shows that 26.5% of Georgians under age 65 and also low income do not have health insurance.

Misconceptions about people in poverty and reliance on social welfare programs contribute to poor public policy decisions.  Policies in Georgia that reduce Medicaid would negatively impact many children, as well as many disabled, elderly, and blind Georgia residents. Medicaid provides 2 million Georgians with access to health care, including 1.3 million children through the Peachcare program. Medicaid pays for more than 50% of births in Georgia and 75% of the cost of Georgia’s nursing home patients. Enrollees for Medicaid must meet specific criteria in order to be eligible for Medicaid. Moreover, the federal government spends over two dollars for every one dollar Georgia invests in Medicaid.

The UN report identified pockets of poverty at third world levels in the US.  Unfortunately, Georgia ranks in the bottom 20% of the nation for poverty and the next to last in the nation for healthcare coverage.   Understanding poverty and its impact on Americans is critical to making good policy decisions.  Contact your local, state and US Congressmen and Senators to discuss these important topics.  Also, if due to a disability, you are without sufficient income or medical coverage, contact this law firm.