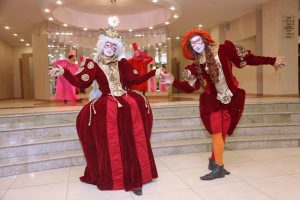 Athletes receive plenty of attention for brain injuries.   However, other professionals  are also very likely to suffer head injuries and may require disability benefits. According to a new study, theater workers and actors are at a high risk of head injuries, due to the risky nature of many of their job activities.

According to the results of the study conducted by researchers at Ohio University, more than two -thirds of surveyed theater workers had suffered at least one head injury on the job. A total of 258 workers were surveyed as part of the study. More than three-quarters of the theater workers said that they had suffered more than three head injuries on the job, and 40% admitted to having suffered more than five head injuries. Many of the injuries were moderately serious, and resulted in concussion-related symptoms, like dizziness.

However, while head injuries among professional athletes are taken very seriously, the same doesn’t happen in the case of theater workers. Approximately 50% of the workers admitted that they had never reported their injuries to anyone.  Theater workers don’t benefit from medical specialists on standby, as sports athletes do, and are, therefore, less likely to seek medical treatment when they are injured.

Some of the more common injuries that occur in the theater industry involve slips, trips and falls and injuries involving heavy equipment.  Some of these slip and fall accidents can be serious, and can result in concussions that can require a person to be off work for a few weeks. What’s even more dangerous is that workers are less likely to take time off after an injury, especially if these injuries occur during a show.

Enthralled by all the razzmatazz on stage, most people fail to appreciate how much at risk theater workers can be. They are constantly moving heavy, complicated equipment, and work backstage in very dark visibility. They are frequently involved in building sets and stage props, and all of these activities place them at risk of an injury.

If your loved one has suffered a brain injury, he or she may be eligible for Social Security disability benefits.  In order to meet a Medical Listing,, the brain injury must match one of the conditions that the Social Security Administration has included in its Blue book, including convulsive/non-convulsive epilepsy, stroke, and mental disorders.  If not included in the listings, a vocational analysis of reduced functioning is conducted.

To understand whether your loved one qualifies for disability benefits after a traumatic brain injury,  contact my office for a personal consultations