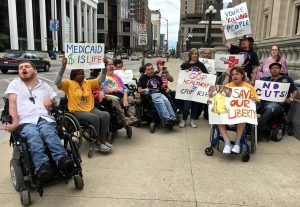 The Social Security Administration provides the most extensive social safety net programs in the United States.  Supplemental Security Income (“SSI”) pays monthly minimal income to seniors and people with disabilities who receive very low or no Social Security and who are extremely poor.  This program is funded from the general tax revenue.  SSI is a companion program to the Social Security program which provides crucial economic security through retirement and disability to individuals who paid into the program through payroll taxes.  In fiscal year 2021, 7.875 million people are estimated to receive SSI benefits totaling $57.5 billion and 65.767 million people are estimated to receive Social Security benefits totaling $1,145.5 billion.

As crucial as the SSI program is, the benefits are modest.  The stated goal of the SSI program, enacted in 1972, is to provide positive assurance that the country’s aged, blind and disabled population would no longer have to subsist on below-poverty-level income.  In April 2020, 8 million people received SSI benefits that averaged  monthly $576.47.  SSI recipients are allowed $20 of income in a month.  After that, unearned income, pensions, Social Security benefits, and in kind support of food or housing provided by family or friends reduces SSI benefits dollar for dollar.  That amounts to a 100% tax rate.  With respect to earned income, the recipient is allowed the first $65 and after that every dollar earned is reduced in SSI benefits by 50 cents.  That amounts to a fifty percent tax rate.

Today’s program does not come close to meeting the legislative goal.  In 2020 the maximum federal SSI benefit is just over $783/month ($9396 a year).  That benefit is less than three-quarters of the federal poverty guideline, which in 2020, is $1063/month ($12760 a year) for an individual.  Moreover, the federal poverty guidelines likely underestimate what is needed to subsist.  Low income recipients often have to choose between food and other necessities.  The Centers for Disease Control (“CDC”) found of all U.S. hypothermia deaths, half occur among persons 65 years or older.  The Census Bureau reports that 5.1 million people aged 65 or older in 2018 had incomes below the federal poverty threshold.  One in four of those with a disability live in poverty.

Recipients must have virtually no resources or other income to receive those minimal benefits.  An individuals’ countable resources are limited to just $2000 and a married couple’s resources to just $3000.  Recipients are allowed a house and one car.  However, with the limits on income, recipients are often unable to afford home or car repairs so these assets usually are forfeited.    Even one dollar more than those limits means failure to qualify.  Congress increased the limits just once, in 1984, and the amount of the increase was minimal.  Congress has not adjusted the limits at all in more than three decades.  SSI essentially penalizes savings.  Exceeding the asset limit results not only in the loss of SSI cash benefits, but also in the loss of Medicaid eligibility, housing assistance and other benefits.

What Congress should do at a minimum is increase the maximum federal benefit to equal the federal poverty guidelines.  In addition, the resource limits should be increased to accommodate the rate of inflation and the goal of the program.   In September 2019, Representative Raul Grijalva (D-AZ) and Representative Elissa Slotkin (D-MI) introduced H.R. 4280 and Senator  Sherrod Brown (D-OH) introduced companion bill S. 2753.  In addition to raising the federal maximum benefit and raising the resource limits, some of the proposed changes include repealing the “in kind support” rule which discourages families from providing food and housing support; and raising the married resource limit to twice the resource of individuals.  The current rule allows only one and half times the resources as individuals and thus, creates a marriage penalty.

As the New York Times reported yesterday, the program was designed to make getting public assistance as unpleasant as possible.  “States were told that they could not receive federal money unless they conducted intrusive investigations of every application, reducing benefits to those who received food or shelter from family and friends.  Programs that allowed beneficiaries to work and save were told to adopt more restrictive eligibility standards or be denied funding.”   And these “ordeals” are designed to “weed out those who would rather go without than brace the bureaucratic gauntlet”

A safety net program designed to pay benefits under the poverty level is a safety net with a hole in it.  Worse, we have accepted this poor “safety net” for decades with no interest in repairing it.  Seniors and people with disabilities deserve better than this.  Rather than having a national conversation on how we can provide the basic minimal assistance to the aged, blind and disabled, we continue to focus instead on how some or all of them don’t deserve it.  We should change that.