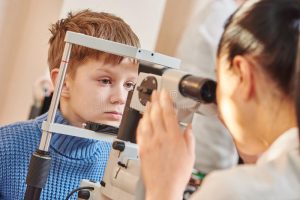 January is National Glaucoma Awareness Month.  According to the results of a new study,  children who have suffered cataracts in infancy have a 22% higher risk of developing glaucoma 10 years later. The results, published in the JAMA Ophthalmology Journal, came from a study which was funded by the National Eye Institute, a part of the National Institutes of Health.  Children who have suffered cataracts in their infancy have a much higher risk of developing glaucoma when they get older.

Typically one may think of cataracts as afflicting only older people, but children can also be affected by this condition. In many cases, the cataract is detected by an eye exam soon after birth. In other cases, parents will detect the cataract themselves as the child gets older. Cataracts are especially dangerous in young children because young children’s eyes continue to develop until they are about 10 years old.  Cataracts can affect the development of vision. While the condition may be congenital in some, it may be acquired in others.