The Atlanta Journal-Constitution reported Sunday that Georgia is expected to announce a plan this summer that would dramatically expand the use of for-profit insurance companies in a new approach to managing Medicaid in Georgia.

Georgia’s Medicaid program costs $7.8 billion annually with the federal government covering seventy-five percent of the cost. Georgia pays approximately $2.3 billion dollars in Medicaid coverage. The federal matching dollar rate in Georgia is one of the highest in the country. This matching rate is based upon state poverty rates. Georgia predicts that this year Medicaid will have a $350 billion dollar deficit with projections to double in three years. David Cook of the Georgia Department of Community Health maintains that, “the current Medicaid program cannot be sustained.”

Roughly two out of ten citizens in Georgia receive Medicaid. The aged, blind and disabled make -up twenty-five percent of the two million Georgia residents receiving Medicaid. However, this group accounts for over half of all Medicaid spending. The bulk of costs for the elderly and disabled tend to come from long-term care. 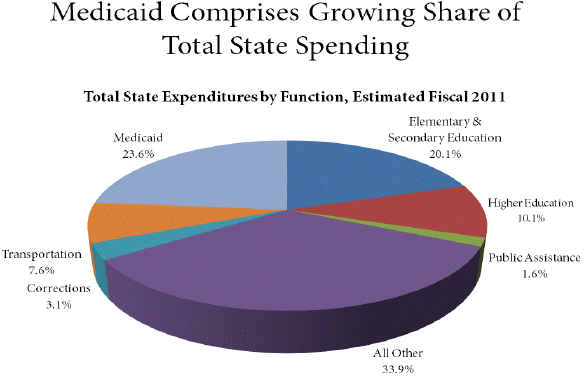 Persons with disabilities who are receiving Medicaid are doing so through a program called Supplemental Security Income (SSI). The SSI program covers disabled workers whose income and assets meet stringent resource tests. Unlike Social Security Disability Insurance, SSI is not dependent on years of paying into the disability insurance program through FICA taxes to qualify. SSI is a need-based program.

In an effort to restrain rising costs, many states are considering allowing for-profit managed companies to run the Medicaid program. Federal law prohibits states from lowering Medicaid eligibility. However, states can apply for waivers to test new or existing ways to deliver or pay for health care services in Medicaid and the Children’s Health Insurance Program (CHIP) programs. Under Section 1115, states can apply for program flexibility to test new or existing approaches to financing and delivering Medicaid and CHIP services. Under section 1915(b), states can apply for waivers to provide services through managed care systems.

Many health care advocates and medical providers question whether for-profit companies in a Medicaid model can improve care, spend less and earn a profit, particularly when provider payments are at the lowest level already. States that have implemented cost-cutting measures and/or hired for-profit managed care companies to run Medicaid programs instituted reforms such as charging higher co-pays to dissuade recipients from “unnecessary” treatments.

A significant body of research shows that while cost-sharing ideas (co-pays) may reduce Medicaid costs, they also create barriers to treatment for low-income populations. Shifting costs onto the population Medicaid was meant to serve – those who can least afford it – should not be an option. Those with permanent disabilities are often the most affected by Medicaid cuts. A chronic, medically disabling condition means one cannot return the workforce no matter what the state of the national economy.

If you are considering applying for SSI benefits or have applied and been denied, contact Lisa Siegel for a free consultation.