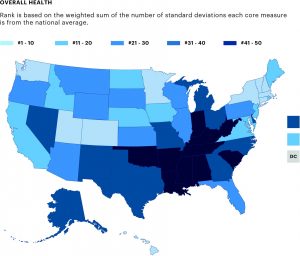 The 2018 health rankings are out and Georgia is 39.  The United Health Foundation, a division of the World Health Organization publishes the yearly results.  The UHR looks at the 35 different criteria.  Some of these include:  children in poverty; prevalence of smoking; prevalence of obesity; prevalence of mental and emotional distress, immunizations, birth weight of infants, and percentage of available primary care and mental health doctors.  The model is built on the World Health Organization’s definition of health.  “Health is the state of complete physical, mental and social well-being and not merely the absence of disease or infirmity.”

The least healthy states are all in the south.  The bottom five are in descending order to unhealthiest:  Arkansas, Oklahoma, Alabama, Mississippi and Louisiana.  Where are the healthiest states?  Hawaii, Massachusetts, Connecticut, Vermont and Utah.

What are Georgia’s health strengths?  The state’s rate of children in poverty fell to 21 percent, down from 22.9 percent last year.  The national rate of children in poverty is 18.4 percent.  Georgia has increased its number of primary care physicians.  Georgia has 121.9 primary care doctors for every 100,000 individuals.  This is a 2 percent increase from last year.   Nationally, the number of primary care doctors has increased 5 percent.  In Georgia, there are 130.2 mental health providers for every 100,000 individuals.  This is up 6% from past year.  Nationally, the number of mental health providers has increased 8 percent.  Georgia’s number of immunized children is high; violent crime deaths are down; and even adolescent drinking is down.

What are the health challenges nationally?  Obesity; premature deaths from drugs, suicides and occupational hazards; frequent mental and physical distress and cardiovascular deaths.

Georgia still has a high level of uninsured individuals.  The University Of Georgia College Of Public Health advised that people without insurance do not have access to regular preventative care which contributes to increased rates in obesity and cancer.

As voters look to the next cycle of elections, keep these numbers in mind and be a healthcare voter.  Happy New Year everyone!