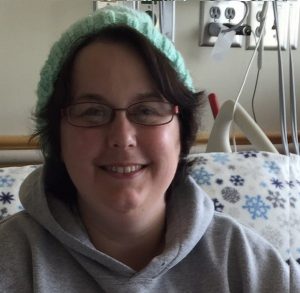 One would think that Michelle’s case would have easily been approved at application. It was not. In May of 2015, we filed an online application for Michelle and sent in a mountain of medical records. We continually faxed over medical records to SSA and spoke with the adjusters each time Michelle entered the hospital. Despite her ten hospitalizations in 2015 and favorable doctor’s statements, the disability review team at the SSA determined that she could stand and walk and lift and carry as necessitated by her job as a preschool teacher and her claim was denied.
We requested reconsideration of this denial in September of 2015 and that was denied again in March of 2016. In the time period from September of 2015 to March of 2016, Michelle had five additional hospitalizations. Her disability file indicates that the second level of review was denied because during one hospitalization, the treating doctor prescribed Humira (a drug to treat her rheumatoid arthritis) and the reviewing SSA doctor thought that would work and she would improve. Also, the reviewing team ignored her treating doctor’s statements that she met a medical listing. A medical listing is a list from SSA of conditions that are considered to be disabling.

Naturally, Michelle was painfully disappointed and frustrated with the process. She came back into my office with her mom to sit down with me and review the disability folder that was now available for our review. Due to being out of work for a year, she had to move in with her parents. Her mother had to quit her full-time job in order to care for Michelle. As if fighting the intractable nausea on a daily basis was not enough, she also had to fight a bureaucratic agency that seemed impervious to her pleas for help.

Twelve months after requesting a hearing with an Administrative Law Judge, Michelle had a chance to speak in person on her behalf. The medical portion of her disability file contained over twenty-six exhibits and over a thousand pages of medical records. Her doctors gave evidence on her behalf. Michelle spoke softly and eloquently about what her days are like. Finally, someone listened. Michelle’s judge told us at the hearing that she would be awarded benefits.

While this is a story with a good ending, I asked Michelle’s permission to tell it mostly because it demonstrates how terribly difficult it is to get a good case through this system. Michelle should have been awarded benefits on her application. At the very least, the reconsideration process should have corrected the application level mistakes. Reconsideration did not work as intended. Only until an ALJ sat down with the evidence and met with Michelle did someone finally consider her case in full. Unfortunately, too many cases like Michelle’s end up in a two-year waiting period for a hearing because the application and reconsideration process are fraught with errors and reviewed too quickly.

I asked Michelle for permission to tell her story to highlight what filing for disability entails for many people. It is a frustrating and long process. Too many good cases are denied for bad reasons. Wait times for hearings before a judge are often over a year. Applicants go through their savings; move in with relatives; sleep on sofas; and worry constantly about decreasing funds. Real people with severe medical needs are unable to afford medical care and often forgo necessary drugs and medical equipment. Thankfully, many of our medical providers, Wellstar Kennestone, Emory and Grady Hospital provide indigent care and reduced cost care for needy patients. I am always grateful for the life-saving care the nurses, doctors and social workers provide my clients; as well as the service they provide my office in collecting and gathering medical evidence.

But mostly I tire of a ratcheted up public perception that too many undeserving people are getting disability benefits. Get in the trenches with me and I will show you real people applying for and deserving of a disability program designed to help needy people. I worry that this incorrect public perception will corrupt public support for a program that so many people need and rely on. There are more stories like Michelle’s. Stay in touch.