This May, the American Heart Association and several other organisations are drawing attention to the disabling impacts of a stroke during National Stroke Awareness Month.

Strokes generally tend to affect older people, but persons of any age can suffer a stroke.  The impact of the stroke may be much higher when the patient is an elderly person. A stroke can result in severe consequences that make it difficult for a person to lead a normal life.  For instance, when the stroke has affected the right side, the impact also includes loss of speech and communication impediments.  There may be weakness in the hands and upper extremities. This makes it difficult for the affected person to lift his arm or to grasp objects.  Needless to say, the inability to perform these actions can mean an inability to perform many manual tasks.

Weakness in the legs or paralysis in the lower extremities could also mean that the person is unable to walk or ambulate without an assistive device.  Swallowing is another function that can be affected by a stroke.  This can directly affect a person’s health because it makes it difficult to swallow his food.  Swallowing impairments cause malnutrition, severe weight loss and extreme fatigue.  Failure to maintain bladder control is another distressing side effect of a stroke that can impair the person’s ability to lead a normal life, including his ability to work and earn a living.

END_OF_DOCUMENT_TOKEN_TO_BE_REPLACED

Black Americans have a risk of suffering a stroke that is as much as four times higher than white Americans.

END_OF_DOCUMENT_TOKEN_TO_BE_REPLACED 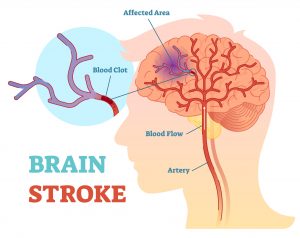 Rehabilitation and therapy services are crucial for stroke survivors who benefit significantly from these therapies. During the pandemic, many Americans who suffered a stroke were unable to access the rehab services that they required.

Rehab, according to the American Stroke Association, should begin within 3 months of a stroke. This is the time when long- term damage from the brain injury can be mitigated, and the brain is most likely to be able to adapt to the damage that it has suffered. Survivors may be more likely to regain skills or learn new ways of performing routine activities when rehabilitation begins quickly.

END_OF_DOCUMENT_TOKEN_TO_BE_REPLACED 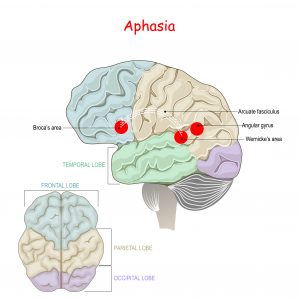 There may be several types of impairments that are seen in a case of aphasia. Sometimes, the person may suffer from an inability to string together words into sentences, while in other cases, only the ability to read is impacted. Some individuals with this condition may find it difficult to attach names to objects. Impairments can affect the person’s ability to read or speak, while others may affect the individual’s ability to write, but leave his ability to speak unimpaired. In other types of aphasia, the person may be left with the inability to provide words or sentences for the ideas and thoughts that he wants to express.

END_OF_DOCUMENT_TOKEN_TO_BE_REPLACED 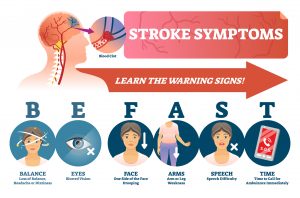 As an Atlanta Social Security disability benefits attorney, I frequently represent claimants who are trying to recover disability benefits after suffering a stroke. A new study finds that a well-equipped mobile unit that delivers lifesaving care to a person who has suffered a stroke in the first few hours after the onset of a stroke, could significantly improve outcomes for victims.

The first few hours after the earliest signs of a stroke are critical. In the first 3.5 hours to 4 hours after a person begins to show the first signs of a stroke like slurred speech, droopiness of the facial muscles, and confusion, a medication called alteplase should be administered to the patient. This is a drug that busts the blood clots that disrupt the flow of oxygen to the brain. When the brain is starved of oxygen beyond a certain period, there can be possibly irreversible brain damage. Brain cells begin to die when they are deprived of oxygen, and the medication can help eradicate the clot that is blocking oxygen supply to the brain cells.

END_OF_DOCUMENT_TOKEN_TO_BE_REPLACED 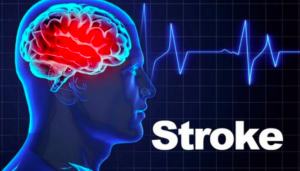 Smoking is also believed to be a risk factor for a stroke. The World Health Organization estimates that smokers have a risk of suffering a stroke that is 4 times higher than for non-smokers.  A healthy diet can go a long way in reducing your risk of a stroke. Fatty, high-calorie foods and drinks can clog your arteries, and increase your blood cholesterol levels, raising stroke risks. Salt is another culprit, contributing to hypertension.

Exercise is also an important part of one’s lifestyle. Even a 30-minute walk a day constitutes exercise that can help you keep your weight under control and stroke risks at bay. Undergo a regular medical screening to rule out hypertension, blood pressure, diabetes, cholesterol levels and other risk factors for stroke.

END_OF_DOCUMENT_TOKEN_TO_BE_REPLACED

According to research conducted at Harvard University, physical inactivity before a stroke is linked to a higher risk of becoming dependent, both before and after the stroke. Researchers focused on more than 18,000 people who had no stroke history. They were followed over a period of 18 years, and during that time, approximately 1,400 persons in the study survived a stroke.

The researchers found that three years after the stroke, people who had a very physically fit lifestyle that included plenty of exercise were 18% more likely to be able to perform independent tasks, such as bathing.  They were also 16% more likely to perform complex tasks, like managing their finances, compared to those who were not as physically fit before the stroke.

END_OF_DOCUMENT_TOKEN_TO_BE_REPLACED

Stroke treatments in the future could be significantly better than they are now, thanks to research that has found a new way to safely remove clots in patients.

Doctors currently treat stroke by using an infusion which removes the blood clots by dissolving them. However, patients who are given this treatment stand a risk of swelling in the brain and excessive bleeding.  In addition, patients must receive the infusion within three hours of suffering the stroke for the treatment to be effective.

However, researchers at the Joslin Diabetes Center in Boston are using a drug combination that will potentially improve outcomes for stroke patients. The researchers conducted tests on mice, and found that when the mice were given the new treatment, there was a drop in bleeding levels, lowered swelling in the brain, and limited brain damage, compared to animals that were not given the treatment.

END_OF_DOCUMENT_TOKEN_TO_BE_REPLACED

According to a new study, younger persons are at an increasingly higher risk of suffering a stroke.

The research was recently conducted by researchers at the Loyola University Medical Center, and the findings have been reported in the American Academy of Neurology. According to the study, approximately 15% of the most common types of strokes in the United States now occur in young adults. Even more worrying is the fact that many young people who were not considered a high-risk category for strokes earlier are now showing risk factors for such strokes.

Approximately 85% of all strokes reported in the United States every year are ischemic strokes, caused by a block of blood flow to the brain. The number of young people who now show risk factors for ischemic strokes has increased, including diabetes, obesity, hypertension or high blood pressure, and high cholesterol levels. In addition, younger persons often times engage in unhealthy activities such as smoking, which can also increase the risk.

END_OF_DOCUMENT_TOKEN_TO_BE_REPLACED

According to research recently published by the University of Michigan Health System, persons who have suffered a traumatic brain injury are at a much greater risk of suffering a stroke later in life, compared to those who have no history of brain injury.

The research was conducted on people with an average age of 49.2 years. Researchers found that persons who had suffered a traumatic brain injury earlier in life had a much higher risk of suffering an ischemic stroke, which occurs when there is a severe lack of blood flow to the brain. Ischemic strokes can leave a person with devastating and lifelong health issues, and even permanent disability. In fact, stroke is one of the major causes of long-term disability among American adults.

The outlook after a stroke is not entirely bleak, and as many as 70% of survivors of a stroke can expect to regain some degree of functional independence. However, roughly 30% of persons who suffer a stroke remain permanently disabled, and may suffer symptoms such as full or partial paralysis, language problems, cognitive difficulties, and sensory disturbances.