This Labor Day marks the 128th national celebration of the American worker.

The Americans with Disabilities Act of 1990 required employers to make reasonable accommodations for people with disabilities.  Yet, today barriers to employment still exist.

END_OF_DOCUMENT_TOKEN_TO_BE_REPLACED 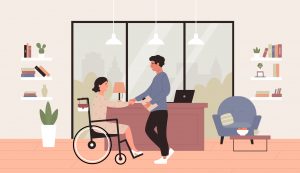 Disabled American workers, who already struggle with limited employment opportunities, bear a greater burden of the economic crisis triggered by the Covid-19 pandemic.

Even before the economic constraints linked to the pandemic, Georgians with disabilities always struggled to find job opportunities. People who struggle with physical and mental disabilities find it hard to locate employment that can accomodate certain impairments. However, the Covid-19 crisis has made those differences in opportunities even more stark.

END_OF_DOCUMENT_TOKEN_TO_BE_REPLACED

Many Americans are currently satisfied with the growing economy.  Unemployment is down.  Currently only 3.9% of Americans list themselves as looking for work today; down from 4.9% in October 2016.  Typically, in periods of low unemployment, wages are expected to increase.  According to the Bureau of Labor Statistics, today’s real average hourly wage is $10.76 per hour.  In October of 2016, the average real hourly wage was $10.72 per hour.  Average hourly wages have increased by only four cents an hour since 2016.

Still, one must consider the inflation rate.  The current US core rate of inflation is 2.4%.  From January to July of 2018, inflation has risen .8 percent.  Inflation has grown over the last few years, making the slightly increasing nominal wages less impactful.  Over the past year, nominal wages— the amount of money people receive in their paychecks without taking inflation into account–have increased 2.7%. As the price of goods and services have risen, average wages have not kept pace.  These factors together lead to a stagnation in real wages. The Economic Policy Institute argues that data shows that workers and the US economy as a whole would benefit significantly from nominal growth rates (the rate not adjusted for inflation) above 3.5% over a long period of time.  Adjusted for inflation, average weekly earnings have fallen 0.1% in the last 12 months.

While many feel the economy is on the upswing, some may be confused as to why their paycheck is not providing a better standard of living.  The devil is in the details.  While unemployment is down, and wages have slightly increased in response, the inflation rate is rapidly rising.  Because inflation is rising faster than wages are growing, many wage-earning Americans are not getting the full benefit of a growing economy.  For people with disabilities, inflation strongly impacts those on a fixed income.  Some individuals with disabilities have a higher cost of working, such as special transportation needs.  This further reduces the value of their wage-earning dollar.

END_OF_DOCUMENT_TOKEN_TO_BE_REPLACED 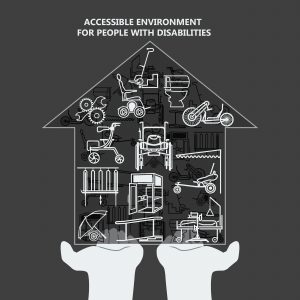 The American Community Survey (ACS) estimated the overall rate of individuals with 1 or more disabilities in the United States population as 12.8% or approximately 41,000,000 people. The U.S. Census Bureau classifies somebody as having a disability if they respond “yes” to any of six questions which identify individuals with daily physical and mental limitations. The survey asked whether questions such as:  “does this person have serious difficulty walking or climbing stairs?” and if due to a physical, mental, or emotional condition, do you have difficulty “doing errands alone such as visiting a doctor’s office or shopping?”