Frequently, someone contacts me who is recently disabled due to a traumatic accident and has no access to healthcare. A similar scenario was depicted recently in a New York Times article on healthcare. Oregon resident Wendy Parris shattered her ankle. Because she was uninsured, the emergency room doctors did not operate on it, but rather placed the ankle in an air cast and discharged her. For four years, she hobbled on the broken foot becoming less mobile and gaining weight. 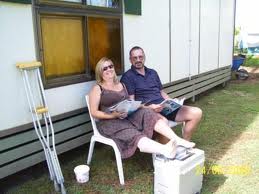 In 2008 Oregon participated in a study where it opened its Medicaid rolls to some working adults living close to the poverty level. Oregon provided healthcare insurance to these uninsured via a lottery system. This allowed Oregon to test a hypothesis on how having healthcare effects individuals and whether having healthcare actually saves money. The study showed that having health insurance made people happier, healthier and more financially stable. The study also dispelled the myth that Medicaid does not help people and that people can get care in ways other than through Medicaid. In fact, the chronically ill or traumatically injured have trouble navigating the healthcare maze of community clinics and charity hospitals. Frequently, they go without care.

Wendy Parris won insurance in the lottery. When she did she was able to have her foot surgically repaired. She was also able to get treatment for her depression, help with her mobility and help losing weight. According to Wendy, “it saved my life.”

The study did show, also, that those with insurance coverage spent more on healthcare. Insured individuals spent about 25% more on healthcare than those who did not win insurance in the lottery. Thus, the same study also dispelled the idea espoused by preventative care advocates that access to preventative care reduces healthcare costs as it keeps the chronically ill out of emergency rooms. Thus, the benefits of expanded access to healthcare coverage also created budgetary concerns for government.

Federal and state governments continue to look for ways to fund Medicaid. In Georgia, state residents have high rates of obesity, infant mortality, cardiovascular deaths, diabetes and asthma. Access to health care does help those who must fight chronic diseases.