In previous posts, I reported how Georgia was considering an overhaul of Medicaid this summer to account for anticipated budget shortfalls. However, last week’s ruling on the Affordable Care Act (ACA) will likely cause the state to put off an overhaul while it contemplates the expansion of Medicaid eligibility in Georgia.

Currently, Georgia’s Medicaid program only covers adults with dependent children who earn within 50% of the federal poverty level. Non-disabled adults with no dependent children are not eligible for Medicaid under any income level. Under the original ACA bill, states that refused to expand Medicaid eligibility would lose all the original Medicaid funding. The Supreme Court found this portion of the bill to be draconian and ruled it unconstitutional. This leaves open the opportunity for states to opt out of Medicaid expansion. 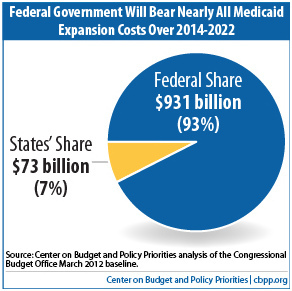 More than 600,000 uninsured Georgians are expected to gain coverage through the ACA Medicaid expansion. If the state approves the expansion it could receive $9 for every $1 of state expenditure. Without Medicaid expansion, Georgia will lose more than $35 billion in ten years. Those federal dollars would flow to hospitals, doctors, emergency rooms, and pharmacies. These additional funds would go to communities throughout the state – particularly those serving an undue percentage of the uninsured. If Georgia does not expand Medicaid, then those federal tax dollars will simply flow to other states. This would lead to vastly different outcomes from state to state.

Expansion of Medicaid would likely provide coverage to an estimated 400,000 to 600,000 Georgians who are currently uninsured. When the uninsured have serious medical problems, they have no choice but to show up at the doors of local emergency room. Hospitals, providers, and those with private insurance now subsidize the cost of providing emergency medical care to the uninsured. With federally financed expansion, Georgia will no longer be primarily responsible for providing coverage to the uninsured.